Twenty-six years ago, on May 25th, 1991, the last Cuban troops left Angola.  Beginning in 1975-76, Cuban forces (eventually numbering around 350,000) entered Angola in support of the the ANC’s struggle against apartheid and, more specifically, to support the Angola Revolution and help create an independent state in Namibia.  Today, as Cuban relations with the U.S. are  in a period of transition and the global Left in a far weaker position than it was in the latter 20th Century, the legacy of Cuban, and 3d World, global solidarity is worth remembering.

For Fidel Castro, race played an important role in his analysis of Empire and Capitalism and South Africa’s apartheid government was perhaps the most visible example and symbol of the intersection of race, power, and global capitalism-cum-imperialism (though surely not the only one–Castro and the Cubans spoke in support of the U.S. Civil Rights Movement, the Black Panthers, and Black Lives Matters and at the U.N. helped sponsor a resolution equating Zionism with Racism). Castro and Nelson Mandela and the ANC had a long relationship, and he often cited the significance of Castro’s 1959 victory —“I read the report of Blas Roca, the general Secretary of the Communist Party of Cuba, about their years as an illegal organization during the Batista regime . . . I read works by and about Che Guevara, Mao Tse-tung, Fidel Castro. . . .”

Cuba’s most important support came not inside South Africa, however, but in Angola, a Portugese colony when, in 1961, the Marxist People’s Movement for the Liberation of Angola (MPLA) began a war of national liberation, which resulted in independence in 1975. The South Africans, supported by various U.S. governments and agencies, did not go away gently, however, and intervened with army, naval, and air force units, with arms provided by Washington, D.C. and other western governments as well as mercenaries funded by the CIA. The new Angolan government asked Cuba for help.

In November, 1975 Angolan and Cuban forces began Operation Carlota, which stopped the South African movement toward the capital at Luanda and pushed them out of Angola altogether. As an ANC paper described it, “Black Africa is riding the crest of a wave generated by the Cuban success in Angola. Black Africa is tasting the heady wine of the possibility of realizing the dream of ‘total liberation.’” That was not imminent, however. South Africa refused to accept self-determination for the Angolans and began a massive military buildup in Namibia, and began to attack the Southwest African People’s Organization (SWAPO), then based in Luanda.

South Africa then funded a counterrevolutionary group, the National Union for the Total Independence of Angola (UNITA)—which had fought alongside the MPLA until 1975—and U.S. President Jimmy Carter made a deal with China to provide it with 800 tons of weapons to fight against the new popular government of Angola in battles which included conventional warfare, air attacks, and raids on SWAPO refugee camps.  Though the UN called for an end to Pretoria’s intervention and Namibian statehood, the incoming administration of Ronald Reagan  continued to send weapons to South African and UNITA forces, led by the notorious Jonas Savimbi, a one-time member of the MPLA with Maoist roots who was backed by not just Washington but China as well.

UNITA aimed to destabilize Angola and prevent economic development by striking civilian targets, kidnapping workers, and forcing a massive outflow of refugees when it attacked a provincial capital at Ngiva. Internationally, the U.S. continued to provide cover for UNITA and funnel aid for its terrorist activities inside Angola.

Still, the Cubans remained in Angola to defend the MPLA government and national sovereignty, though Cuban troops had not been involved in direct fighting since 1981. Savimbi and the South Africans continued to request more aid from the U.S. with the goal of establishing a provisional government that would be recognized by western states. By 1987 South African and UNITA forces were building fortifications for a large-scale offensive against Angola and the Cubans returned to combat. The South African offensive initially pushed back the Angolans, who had set up a defensive line at Cuito Cuanavale, a town in the Southeast, where the American-backed troops from South Africa and UNITA laid siege. The Cubans were fully involved from that point forward.

The South African forces took the initiative at Cuito Cuanavale, endangering the entire Angolan government. The Cubans feared the fall of the MPLA as well as damage to global resistance movements, so in November, 1987 began to resupply Angola with a vast amount of equipment—tanks, artillery, anti-aircraft guns, aircraft, and over 50,000 troops (The Soviet Union sent large numbers of tanks and aircraft as well).

The Cuban role was huge. As the South Africans had to fight for Cuito Cuanavale, the Cubans in early 1988 outflanked them to the West and along the Angola-Namibia border with 40,000 troops (30,000 Angolan and 3000 SWAPO fighters also took part in the battle) and marched toward Namibia, and by June the South Africans had been defeated. Consequently, Angola remained sovereign and Namibia gained its independence, and the South Africans suffered a huge loss of credibility across the globe, hastening the end of apartheid. Cuba’s role in all those conflicts was immense, and 2077 Cuban soldiers died in the struggle for anti-Apartheid resistance and Angolan and Namibian independence (which occurred on March 21st, 1990). 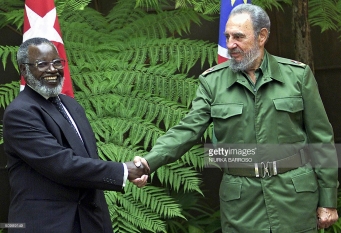 Sam Nujoma of Namibia and Castro

Mandela recognized Castro’s support during that 1991 visit, “The Cuban people hold a special place in the hearts of the people of Africa . . .  Without the defeat of Cuito Cuanavale our organizations would not have been unbanned! The defeat of the racist army at Cuito Cuanavale has made it possible for me to be here today! Cuito Cuanavale was a milestone in the history of the struggle for southern African liberation!”

Today, America’s involvement in the Middle East is more entrenched, complex, and directly violent than its role in South Africa and Angola a quarter-century ago, and there are few outside forces to ameliorate conflict or keep imperialism at bay . . . like Castro and Cuban soldiers did from 1975 to May 25th, 1991.