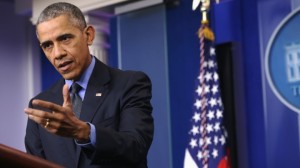 Obama talking to the press before going to San Bernadino.

On December 6th, 2015, just a few days after the San Bernardino shootings, President Barack Obama spoke to the nation from the oval office to discuss the ongoing “Global War on Terror.” The recent attacks in Paris in San Bernardino had escalated the use of terror by groups like ISIS and al-Qaeda, he warned. “Over the last few years,” he explained, “the terrorist threat has evolved into a new phase.  As we’ve become better at preventing complex, multifaceted attacks like 9/11, terrorists turned to less complicated acts of violence like the mass shootings that are all too common in our society.”

Like Americans plaintively asking “Why do they hate us?” in the aftermath of the 9/11/2001 attacks, Obama’s words don’t take account of historical truths—there is no “new” phase in Middle Eastern enmity and aggression toward the United States, and U.S. policies in that region have long been an irritant at least and a precipitant often of violent actions directed at American and other western targets.

Some time ago I came across a document that I found remarkable in it analysis of the U.S. role in the Middle East. It began:

Acheson to Certain American Diplomatic and Consular Officials, “Anti-Americanism in Arab World,” May 1, 1950.

In one brief paragraph, one can see a striking overview of Middle Eastern attitudes toward the U.S. and speculation on the causes of Arab enmity toward the U.S.  (including the admission that “sincere objection to America’s part in Palestine developments” was a major factor in anger in the region).  But what’s more striking is the date on which this memorandum was issued.  Secretary of State Dean Acheson sent it to diplomatic and consular officials in the Middle East . . . on May 1st, 1950.  Already, not quite two years after the U.N. recognized Israeli statehood, not five years after World War II had ended, only a few years after a U.S-Soviet showdown in Iran, and before the ouster of Mossadegh and the rise of Nasser, there was visible and “resurging” anti-Americanism in the Arab world.  Current Secretary of State John Kerry, changing some of the particulars, could have written precisely the same analysis . . . yesterday.

So when politicians and pundits speak with great passion and hyperbole about the nature of Islam or the instability of the Arab world, they’re clearly avoiding the reality of the past.  The United States was seen as another western power–like the British and French in the post-World War I Mandatory era–coming in to expropriate and get wealthy from Arab resources.  Obama may have warned of a “new phase” in aggression and violence against the West from groups in the Arab and Muslim world, but 65 years ago, America’s leaders already understood Arab enmity toward them and knew some of the reasons why.  We can talk about Islam, the vicious nature of ISIS, the Syrian crisis, Iranian nuclear programs, or any various other issues, but unless the U.S. recognizes its historical role in the Middle East and makes policy accordingly, anti-Americanism is going to keep resurging, and resurging, and resurging . . .