Older and Wiser, and Vote-Shaming

Donald Trump had barely been inaugurated when the warnings started, in political discussions, memes, social media postings, everywhere.  In the next election, non-Trump supporters were obliged, with no discussion or demurral allowed, to vote for whomever the Democratic running for president in 2020 was.  If you were anti-MAGA, you could not vote for the Greens or any other party;  you could not even just not vote.  There were clear marching orders: “Vote Blue, No Matter Who.”

And now that time has come and the chorus has grown even louder.  The nominee, the inevitable nominee, Joe Biden, semi-lucid and mezzo morto, as Junior Soprano would say, will go into the ring against Trump (I keep having visions of Chuck Wepner when I use that metaphor).  And now Bernie Sanders’s supporters, $180 million and a lot of miles on their shoes shy after a lot of labor and love fighting for a candidate who never was going to be the Democratic nominee, are being ordered to vote for Biden.

And then, I just saw this, “an open letter from the old left to the new left,” and it’s deeply saddening.  This missive, lecturing and condescending, came from alumni of the Students for a Democratic Society and other partisans of the “New Left.” (See Staughton Lynd and C. Wright Mills on the New Left).  Without going into exhaustive detail, SDS was one of the most important organizations of the tumultuous 1960s, dedicated to bringing a “participatory democracy” to the U.S., not a contrived political system in which simply voting for elite-chosen candidates was one’s only civic role.  And the New Left was a large and amorphous description for scholars and radicals who took on the Capitalist state and, most importantly for us here, developed the idea of Corporate Liberalism.

Though it seems anomalous, the idea of Corporate Liberalism, to simplify things, meant that Corporate America–wealthy, powerful, and conservative–was the main agent for change in politics.    As explained by an SDS theorist, Dick Flacks, “the people who are running society are the corporate liberals. They want to stabilize, not repress . . . ‘Corporate Liberalism’ mean reforms made by the power elite in the interests of social stability [not] redistribution and social equality.”  Liberal groups, such as organized labor, were brought into the halls of the Democratic Party and “had been separated from the real base of power.”  Liberals, as SDS described them, wanted to ensure mainly that the “old order of private corporate enterprise shall be preserved and rationalized.”  And while there might be “good liberals” in political office, they were “trapped by the limitations of the Democratic Party but afraid of irrelevancy outside.”

And that, folks, just described Joe Biden and Bernie Sanders . . . fifty-some years ago.

So now it’s deja vu’ all over again from 2016, with the Dems running a horrible, terrible, no good, very bad, and uninspiring candidate whose main (sole) quality is that he’s NOT TRUMP.  And the liberals who hated Sanders so virulently for being, well, an old-fashioned New Deal liberal, are apoplectic again with their demands to vote for Biden.  In The Nation, about three dozen ex-New Lefties (the best known of whom was the predictable shill Todd Gitlin) scolded young people who are unhappy with Biden and considering a vote for the Greens, or not voting at all, with dramatic and oversimplified scare tactics.  “Now we fear that some on the left cannot see the difference between a capitalist democrat and a protofascist,” they explained. “We hope none of us learn this difference from jail cells.”

Apparently people younger than them, like under 70, can’t really grasp how horrible and awful and dangerous Trump is?  This is especially grating because the people most upset about Biden and unlikely to vote are many of America’s most precarious–the gig workers and indebted students and young people in low-wage jobs and the uninsured–and they’re  being hectored by a group of radicals emeriti who are probably living quite nicely and have sheepdogged for the system to the extent that they’d never be tossed in a jail cell (though perhaps they’d run the library at the re-education center).  In a short piece in an increasingly-desolate rag, these Lefty alums showed that they’d abandoned the core principles that got them politically involved so long ago. As the brilliant Phil Ochs sang,

Once I was young and impulsive
I wore every conceivable pin
Even went to the socialist meetings
Learned all the old union hymns
But I’ve grown older and wiser
And that’s why I’m turning you in
So love me, love me, love me, I’m a liberal

It’s unfortunate that the editors of The Nation didn’t look into their archives and discover a 1956 article their ancestors had published written by W.E.B. DuBois titled “I Won’t Vote.”  And to think that Ike and Adlai would be fantasy candidates today . . .

Nowadays, research is easy.  So spend some time, set aside a few good hours at least, and look at Democratic campaigns since, let’s say 1968.  There’s a recurrent theme.  The Democrat’s main go-to strategy in every election has basically been “the other guy will destroy the country.”  It was quadrennially  “the most election in our lifetime,” and whether Nixon or Ford or Reagan or one of the Bushes or Trump, the GOP candidate was an existential threat to our society.  So the Dems kept putting up nominees with the charisma of a pile of sod and jerking themselves further and further to the right to get to that fantastical, ephemeral, necessary-to-win-the-election VITAL CENTER.  And they kept losing elections (except when they ran two charming candidates in bad economic years with huge side factors–i.e. Ross Perot and the Great Crash of 2008).

Like the Washington Generals, the designated loser to the Harlem Globetrotters, the Dems kept doing what they’d always done . . .  Call for moderation and centrism, make sure that a candidate with more progressive ideas or some enthusiasm (Hart, Bradley, Jackson, Sanders) hit a dead end, put up a candidate who rouses little to no excitement, lose, blame someone else, rinse and repeat. They’re the #WashingtonGeneralsofPolitics. 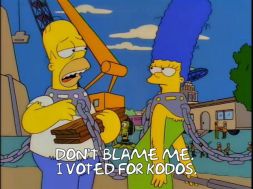 It may be corny, but some people believe that candidates are supposed to “earn” the votes of the American people, not get them by default because the other candidate is a bigger monster.  The most skeptical, and vulnerable, voters are staring into the abyss of the greatest public health and economic crisis in a century and want decent jobs, less debt, and health care.  Yet Biden vowed he would veto a Medicare-for-All law (think about it, that assumes it passes a Democratic-controlled senate) and the Democrat’s response to the vast number of unemployed, and thus insurance-less, people is . . . to expand COBRA.  As it’s clear to the world that America’s health care system, economy, and democracy have all failed, the Democrats are rushing in with bailouts to banks and big corporations and crumbs for working people.  But vote Blue no matter who!

In reality, voters matter in just 6 places–Michigan, Pennsylvania, Wisconsin, Arizona, Florida, and North Carolina.  The rest of us are just going through the motions and going to the polls to validate an outcome that we’re all aware of today. But no matter where one lives, she/he has the right to simply vote for any candidate on the ballot, or even not vote at all. It’s not a hard concept.  If you really fear Trump, and you should, then make a convincing case for Joe Biden–don’t just throw around more ghost stories.  And if you know someone who prefers Trump, then try to talk him/her out of voting at all.

Liberals are a peculiar bunch.  They love liberty and freedom.  They believe in equality and personal space.  They believe that a woman should have the right to choose whether to have a child, and that gays should have the right to get married. So perhaps the right to vote, or not to vote, should be part of their ideology too.  In any event, stop the scolding and hectoring and vote-shaming, and go out and work to get your guy elected.  Or maybe better, get involved in movement politics instead of obsessing over electoralism and waiting for a hero to save you.

Otherwise, have a good day.

2 Responses to Older and Wiser, and Vote-Shaming